‘Jingling’ proves lucrative after all

Posted on February 11, 2013 by CharliesTinyUniverse

I always thought it’d be fun to record a jingle.
Think about it. “Mentos,” “My Buddy,” “Kit Kat,” “Oscar Mayer Wiener,”
“Folgers.”
All those little ditties just come alive in your head, don’t they?
“Fresh goes better, Mentos freshness, fresh goes better with Mentos,
fresh and full of life. Mentos, the freshmaker.”
That’s what jingles are meant to do. Get stuck in your head, keep
people thinking about the product.
Last month, I was asked by Montana State Parks to record a jingle to
encourage people all over the state to “book their campsite
reservations now.”
When I was at Indiana University, a business student in the same dorm
wing told me that there was a lot to be said for jinglers. It was a
lucrative business.
“You know who wrote the Folgers jingle?” he said. “Barry Manilow.”
Jingling, to me, still wasn’t something I strived for. But if I got
asked to do it, more than likely I would.
That’s exactly what happened.
Just a few days after going on a hike in Makoshika State Park with
Montana Fish, Wildlife and Parks Administrator Chas Van Genderen, I
got a call from his assistant Jen Lawson in Helena asking if I’d be
interested in recording the 30-second radio ad they’d written.
While Van Genderen was in Glendive, I’d given him my album, but I was
not expecting such a call.
“Would you be interested?” she asked.
“Absolutely.”
Then, with the help of Damion and Troy Taylor of Glendive, a jingle was born.
The idea behind the jingle that Van Genderen, Lawson and a few others
wrote was to list as many state parks as possible in 30 seconds and
still have time for the tag.
I sped up a progression similar to Johnny Bond’s “Sick, Sober and
Sorry” and started singing park names: Bannack, Black Sandy,
Beavertail Hill, Big Arm, Brush Lake, Cooney, Finley Point, Hell
Creek, Lake Mary Ronan, Lewis & Clark Caverns, you get the idea.
Then the tag: “Montana State Parks, book your campsite reservations
now. Visit stateparks-dot-m-t-dot-gov and explore more.”
This is how I bought my first couch -– the jingle couch, as I like to call it.
It turns out my friend at IU was right. Jingling can indeed be lucrative.
When they told me how much I was getting for the 30-second ditty, I
ran down to Wier Furniture and looked around at the couches, knowing
that’s exactly what I needed my second day in town.
And that’s when I saw it. The jingle couch: soft, comfortable, long
enough to lie down on. It’s hard to describe the color, at least for
me it is. I’d say dark amber.
This is the first time I’d bought a couch of my own. My last few
apartments were furnished. I wanted to get something I was proud of,
something that meant something to me.
Hence, the jingle couch.
And, beginning this month, that jingle will be aired statewide. If I
ever hear it while driving around, I will think of my couch and it
will make me smile.
I’m no Barry Manilow, and I wouldn’t say that my jingle holds up to
Mentos, but it is something I’m proud of and – well, I’d do it again.
Maybe someday I can get a jingle bed.

As published in the Lewistown News-Argus 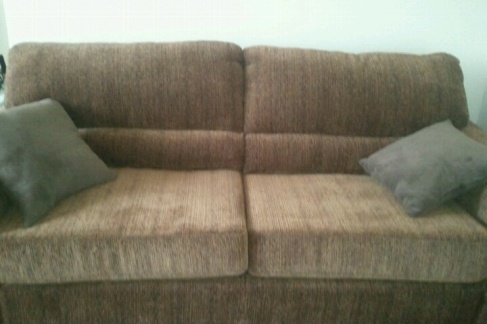 Originally from the suburbs of Indianapolis, Denison is a writer and musician who has picked up culture and influences from eccentrics all over the U.S. and even overseas. He is a University of Kentucky Journalism School grad and an award-winning Montana journalist. Through the years he's had work published in the Montana Quarterly, Rural Montana Magazine, Raised in the West, Last Best News, NUVO and others. He has a solo album, "Whispers of the Lonely," blending country, folk, blues and soul, and plays regularly with his band, Groove Creek.
View all posts by CharliesTinyUniverse →
This entry was posted in Uncategorized. Bookmark the permalink.