Kindred Spirits: reflections on seeing Springsteen with my dad

Posted on October 7, 2016 by CharliesTinyUniverse

When I was in seventh grade, my favorite thing to do was retreat to the basement and play Super Nintendo. It was my passion and what I used to escape from a life I wasn’t excited about. My dad hated to see it. He wanted me to live a life I didn’t want to escape from. So, he started encouraging me to play guitar, setting me up with lessons at IRC Music in Indianapolis.

Every week, he’d ask me if I wanted to quit because he didn’t want to force me to do something I wasn’t into. He didn’t want it to be a chore; he wanted it to be my decision.

After a while, I really started getting into it. I made new friends, started playing in a band, started writing songs. Suddenly, I had exactly what he was hoping I’d have:  something I could get excited about that I could share with others, whether playing with them or performing for them. And – what do you know – I no longer wanted to escape my life.

By the time I was a sophomore in high school, I was pretty into it. Music was life. It’s all I cared about, really. I was in my room blaring Led Zeppelin, Monster Magnet, Type O Negative, Jimi Hendrix, Foo Fighters, Nirvana and Green Day. I’d jam with my friends and doodle band names onto my notes and book covers during math class.

I thought I was so cool and that I knew what was cool. Then, one day, my dad stopped into my room and said, “Hey, Bruce Springsteen is playing Conseco Fieldhouse next month. Let’s go!”

My dad shut me down right away.

I knew then there wasn’t any getting out of it. My dad was going to drag me to see Bruce Springsteen and the E Street Band, and I just had to deal with it. To encourage me to get excited about the show a little more, my dad also invited my friend Drew. We’d both been at the last show at Market Square Arena (Lynyrd Skynyrd/ZZ Top/Screaming Cheetah Wheelies) in October, so it was cool to have the opportunity to see the first concert at the new venue downtown. This was a big time for Indianapolis. There was a lot of growth and a lot of big change. Indy was cleaning up its act and – while at it – bringing in great acts.

When we got to Conseco, the place was completely packed. Everywhere you went there were Springsteen shirts. People of all ages. And the place was alive. I’d been to some concerts before, but I’ve never felt anything like this – and the show hadn’t even started. Bruce fans were louder than Pacer fans. They were louder than any fans I’d ever heard, then and now.

“BROOOOOOOCE! BROOOOOCE!” People yelled. It almost sounded like booing, and I thought it was, at first.

“Are they booing?” I asked my dad.

He didn’t even answer. Instead, he laughed and joined in, and then I could tell what they were saying. It almost gave me chills. The energy was electric. No wonder there was no warm-up band.

From the opening “Ties that Band” all the way to the “Ramrod,” which ended the second encore, I was hooked. At one point – I believe it was during “Tenth Avenue Freeze-Out” – Bruce jumped on top of the piano and roared. Our seats were pretty high up, but I could see his arms up in the air and – thanks to the large screen – I could see the look of intense joy on his face. He was at home, loving every minute of the performance and giving all he had, which was a lot. Three hours with no break.

“That’s why they call him ‘The Boss,’” my dad said. “He’s one of the best performers you’ll ever see. Probably the best. No one puts more into it. That’s how it’s done. He wants it. You’ve got to want it. This is what I wanted you to see.”

My dad knows all about that fire. He caught it long ago. Probably 1975 when “Born to Run” came out. He didn’t keep the fire to himself. Instead, he spread it around, sharing it with communities all over the Midwest and beyond, changing lives and helping people see their inner best. He spread it around Fishers as the founding pastor of New Hope Presbyterian, a church he saw grow to 500-strong.

My dad isn’t just a fan of Springsteen – he’s a kindred spirit. Both of them had it hard growing up; both of them had parents yelling, “stop playing that goddam guitar;” both turned against their government, protesting against the Vietnam War, which killed a lot of their close friends – and could have killed them. They’re baby boomers who got their guitars and learned how to make them talk. They’re men with stories to tell. My dad chose to tell his stories primarily from the altar, but music has always been a big part of his ministry – and his life. Still, it’s the same gift, and what an amazing gift it is: to inspire, to light a fire.

Three weeks ago, my dad was in an awful car accident inside Yellowstone National Park. He was life-flighted to the Eastern Idaho Regional Medical Center, and he’s still there. He’s going to make it, but it’s been a scary battle. Fortunately, he’s headed the right direction, but being so close to losing him has been hard. It’s made me think about our times together and about what kind of man my dad is what he’s taught me and what he means to others.

The Springsteen concert encompasses a lot of what makes my dad special. He has the same intensity for life as Springsteen, and I look forward to seeing him return to form. He’ll be writing, playing and sharing his stories again in no time. And, when he does, I’ll thank him again for taking me to see The Boss. He knew exactly what he was doing. He knew what it’d do to me, and, for that, I’m forever grateful. 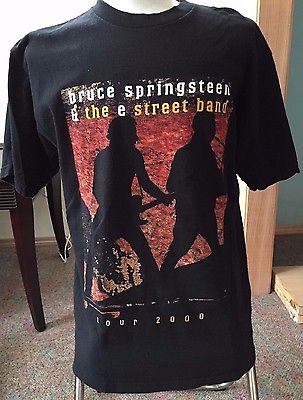 My dad bought this shirt the night of the concert. I wore it to school the next week, proudly admitting I was wrong about “The Boss.”

Originally from the suburbs of Indianapolis, Denison is a writer and musician who has picked up culture and influences from eccentrics all over the U.S. and even overseas. He is a University of Kentucky Journalism School grad and an award-winning Montana journalist. Through the years he's had work published in the Montana Quarterly, Rural Montana Magazine, Raised in the West, Last Best News, NUVO and others. He has a solo album, "Whispers of the Lonely," blending country, folk, blues and soul, and plays regularly with his band, Groove Creek.
View all posts by CharliesTinyUniverse →
This entry was posted in Creative nonfiction music journalism and tagged Bruce Springsteen Chuck Denison Conseco Fieldhouse. Bookmark the permalink.