Why I Love the NBA

Posted on July 1, 2017 by CharliesTinyUniverse

Editor’s note: Yesterday, Indiana Pacers star Paul George was traded to the Oklahoma City Thunder for former IU standout Victor Oladipo and Arvydas Sabonis’ son, Domantas. This is the end of an era for the Pacers…again, and, sadly, one that only brought us to the Eastern Conference Finals a couple times (against LeBron’s Heat, and we had no chance). It’s days like today when it’s fun to get nostalgic over the most exciting Pacers era, one that made me an NBA fan for life. Enjoy!

When I was in middle school in the suburbs of Indianapolis, Reggie Miller was the talk of the town. The Indiana Pacers were making noise, mainly thanks to what we all now know as “Miller Time.”
There was no greater clutch performance than Game 1 of the 1995 Eastern Conference Semi-Finals, when Reggie shocked the New York Knicks – and the world – by scoring eight points in the final eight seconds, winning the game by 2.
Everyone in Madison Square Garden that evening was blown away. Silence. Shock.
“Did he just did that?” Knicks guard John Starks said afterward, completely dumbfounded. 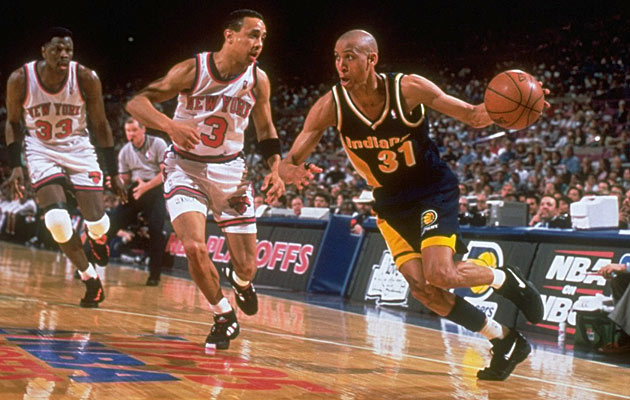 “This is for Indiana,” Reggie said in the post-game interview. “Indy, this is for you!”
Reggie brought Naptown together that night, and my family was right there in the mix. We’d been watching that game from home earlier in the day, but it didn’t look like the Pacers were going to pull it off. They were behind all game and their body language made us worry they were going to throw in the towel and save themselves for Game 2.
So we went to Damon’s, a rib joint off 96th Street. We tuned in to the game every once in a while, but it wasn’t pretty, especially when we saw there was a 6-point deficit with eight seconds to go.
“Time for plan B,” my dad said.
That’s what we always called it when we knew the Pacers were going to lose (honestly, I don’t know how much faith we had in then-coach Larry Brown).
Paying attention now, we watched Reggie hit a three, but we didn’t think much of it: too little too late.
Then Reggie stole Anthony Mason’s poor inbound pass and had the presence of mind to step behind the three-point line and drill one from downtown.
“Boom Baby!” Slick Leonard yelled ecstatically on Pacers radio.
We loved how he’d call the games so much we usually muted Marv Albert.
“He’s a Knicks fan, anyway,” my dad said of Marv. “He has great pauses, but he wants the Pacers to lose.”
Slick – a local favorite and former Pacers coach – was blasting at Damon’s, and the room erupted. Reggie had tied the game, and we’d all counted our Pacers out. None of us could believe it.
Neither could Starks. And, unfortunately for him, he had to shoot two free throws.
Starks bricked them both, and guess who grabbed the rebound? Reggie.
“I hated Reggie Miller,” Knicks center Patrick Ewing said in an interview years later. “I really hated him.”
One of the best free-throw shooters in NBA history, Reggie made both easily. As usual, he was calm and cool under pressure, living for such a moment, embracing it and delivering.
The crowd at Damon’s went wild, as fellow Hoosiers hugged and gave high-fives. Many of them didn’t even know each other. Some, like my mother, even cried.
I’ve loved the NBA ever since.

Originally from the suburbs of Indianapolis, Denison is a writer and musician who has picked up culture and influences from eccentrics all over the U.S. and even overseas. He is a University of Kentucky Journalism School grad and an award-winning Montana journalist. Through the years he's had work published in the Montana Quarterly, Rural Montana Magazine, Raised in the West, Last Best News, NUVO and others. He has a solo album, "Whispers of the Lonely," blending country, folk, blues and soul, and plays regularly with his band, Groove Creek.
View all posts by CharliesTinyUniverse →
This entry was posted in Sports and tagged 1995 NBA Playoffs, 90s nostalgia, John Starks, NBA, Patrick Ewing, Paul George, Reggie Miller. Bookmark the permalink.