Posted on April 5, 2019 by CharliesTinyUniverse

“Where there is love, there is joy.” – Mother Teresa

Kari wore her light blue sundress – the one she wore the first night we went to dinner.

We went to The Mint, a restaurant I’d go to regularly – only this time I didn’t order a drink, which made me uncomfortable.

“Are you sure I can’t get you anything besides water?” the waiter asked.

He wasn’t just a waiter – he was a friend. He’d often join me for a round after finishing a shift.

Trying not to act surprised by my newfound sobriety, he nodded, smiled at both of us and greeted another nearby table, not missing a beat.

That was five years ago.

Now seated in the Carnival Inspiration dining hall – which looked like a Bellagio knock-off – I poured water into our tall, extravagant glasses. We looked out at the Pacific Ocean, once again mesmerized by its vastness just as Montana tourists are captivated by our endless sky.

Little time passed before our Filipino waiter, Richard, politely asked if we’d like to take a look at the wine list. I turned him down, feeling no discomfort.

“Let me know if you change your mind,” he said giddily, looking at us like a boy looks at a puppy.

“You here on honeymoon. Congratulation!”

I looked over at Kari and took her hand, massaging it gently.

“Thank you,” she said, looking down to try and hide her red face. She looked up at me and smiled. It was similar to the one she had after our ceremony. Her natural beauty gave me chills. Sometimes I look at her and lose myself because I can’t believe she’s mine.

“Yes, you are lucky man,” Richard said, making me realize I’d said it out loud. 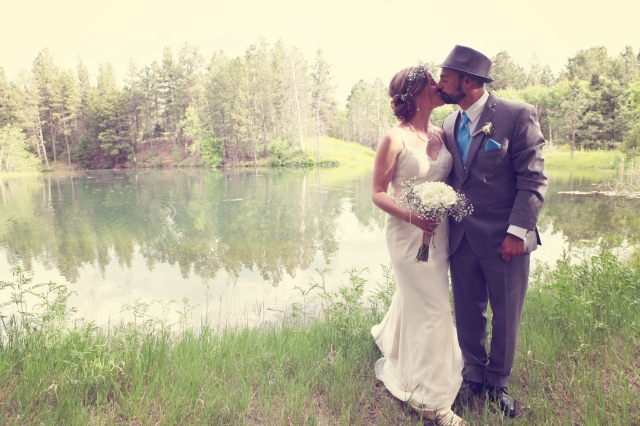 When I first saw her standing in the corner of the Rising Trout Cafe during Open Mic Night in May of 2012, I knew there was something special about her.

I was playing an original about being there to “sing you along” when I spotted her in a black shirt and blue jeans. She had one braid in her striking long blond hair. Although she wasn’t smiling,  she had a glow about her, a presence that was undeniable.

I knew we belonged together.

It took almost two months before we were introduced, but from there we took off. When we went to lunch, I was surprisingly nervous, hardly eating my sandwich. She was nervous, too. When I kissed her on the cheek she let out a little laugh and said, “Thank you.”

The next date she kissed me on the lips, and it was my turn to be surprised. I wanted to say “thank you,” but instead I just smiled, bracing myself for love.

Not long after that we were inseparable. Even when we weren’t around each other, we were calling and texting, rarely disconnected.

But as we grew, so did my involvement in the local music scene, which involved a lifestyle I tried to leave behind. I liked to go out and meet with friends at the bars to have a few drinks. A few often led to too many, which led to poor choices.

Despite being sober more than 10 years, Kari tried to not let drinking be an issue in our relationship. Although she feared I could do something hurtful, she didn’t want to be the bad guy to tell me not to drink. She had faith I’d figure it out before it was too late, but mistakes were made. Alcohol became a distraction, a dividing line, a crutch.

With the help of a counselor, several sober friends and Kari, I was able to successfully leave alcohol behind. I no longer felt numb. I got to know myself all over again and refocus on being my best self. This is a promise I’ve made to myself and one I’ve made to Kari. We had our trying times, but we’ve overcome them through faith, trust, sobriety and indestructible love.

“Look!” a little girl at the table next to us yelled, abruptly getting out of her seat and running to the nearest window. We followed her gaze and spotted a few dolphin fins to our right. At a closer glimpse, you could see their bodies flopping and hopping, swimming around with the silliness and innocence a child possesses: dancing like no one is watching. I wondered if they knew they had an audience. Whether they did or not, it didn’t matter: they captured the moment; they were away, unflappable,  in love with life.

Kari laughed at their performance and took my hand.

He continued, now more boisterous than ever.

“Ladies and gentlemen, I have a very special announcement for you. We have a happy couple celebrating their honeymoon here on Carnival Inspiration. It gives me great pleasure to sing for them.”

Kari and I expected the cheesy “happy honeymoon” song other servers sang for their tables the night before, but Richard surprised us, serenading Kari with a composition all his own, one that was perhaps interpretive, like he could read our eye contact and understand the adversity we overcame.

He went on. By the end, Kari hid her red face behind her water glass.

I stood and clapped. Richard gave me a fist bump and laughed proudly. Like the dolphins, he owned the moment, putting on a show to give us something we’d cherish forever.

Our whole section applauded, Richard bowed, I sat down and we went back to our date. Once we stopped laughing, Kari lifted her water to propose a toast.

“To Richard,” she said, letting out a tiny laugh. “Because of you…”

“To Richard, and to our love. Let’s never forget how it sets us free.”

Originally from the suburbs of Indianapolis, Denison is a writer and musician who has picked up culture and influences from eccentrics all over the U.S. and even overseas. He is a University of Kentucky Journalism School grad and an award-winning Montana journalist. Through the years he's had work published in the Montana Quarterly, Rural Montana Magazine, Raised in the West, Last Best News, NUVO and others. He has a solo album, "Whispers of the Lonely," blending country, folk, blues and soul, and plays regularly with his band, Groove Creek.
View all posts by CharliesTinyUniverse →
This entry was posted in Love, Travel and tagged Carnival, Honeymoon, Love, Newlyweds, sobriety. Bookmark the permalink.