Supaman unites through hip-hop and positivity

Posted on May 11, 2019 by CharliesTinyUniverse

Christian Parrish Takes the Gun doesn’t hide from his identity.

He doesn’t hide that he’s Supaman, nor does he hide where he comes from: the Crow Agency of Big Horn County, Montana.

Supaman spent some time in Lewistown this week, where he performed and spoke at both Kindness convocations, wearing his fancy dance regalia, and busted out his signature fancy dance outfit at Central Feed Brewing Co. as part of the MIH concert series.

Jason Stephens, a spokesman for MIH, first saw Supaman at the Red Ants Pants Music Festival last summer. It was that show that inspired Jason, Renee Stephens, Chris Hildebrant and other Make It Happen representatives to bring Supaman to Lewistown, where they hoped he’d get a similarly favorable response from non-native Montanans.

Such a reception is heartwarming for Supaman.

“We are still repairing the relationship Montanans have with the Native people,” he said. “We are working toward this, so it’s cool to come to a community like Lewistown where I’m seeing people putting together the Kindness project and the Unreserved program. It’s neat to see students from Hardin and Browning working together because they are old-school enemies. We still joke around about it, saying ‘this is our land,’ or ‘no, we were here first.’ Seeing this all come together – that’s how it should be.”

It takes understanding and an open heart to bridge these gaps, Supaman said. With his platform as a performer, he tries to encourage people who come out to his shows to respect others, learn from others and get a better understanding of differing cultures and identities.

“The platform I’ve been given is huge,” he said. “When I first started doing hip-hop, I was just into hip-hop. I wasn’t preaching ‘power to the people,’ but as I started performing and started maturing more as a human being I started to see there was a truth out there no one was talking about. As Native people, we’re always forgotten, and, seeing that, kind of made me think ‘yo, I have to say something. It’s my duty.’ That’s when I started gearing my music more that direction and using my platform to address those issues, but I wanted to do this in a way that brings people together. I started gearing my music toward positivity, toward bridging the gap.” 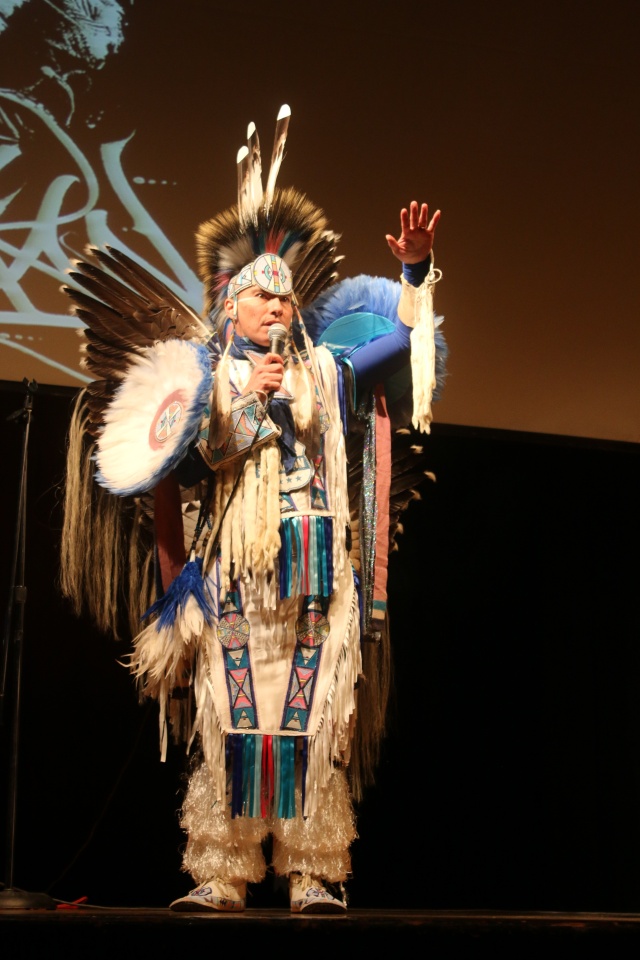 Supaman was well aware that a hip-hop artist with a positive message was not a popular choice. However, he was determined.

“Mainstream hip-hop is about partying and being crazy, right? But I learned over time – if you have the skill level, the rhyme structure, the witty punch lines, the hip-hop community respects you. They’ll give you a chance.”

Wanting to elevate his game in the hip-hop world, Supaman likes to pull out all the stops. He loops traditional Native American flute, drums and old vocals with contemporary hip-hop beats. He also wears his traditional regalia.

Although his regalia is a big part of his image today, the decision to wear it while performing his hip-hop happened by chance.

“When I started I never put my regalia on when I put on a hip-hop show,” he said. “Where I come from you just don’t do that. It was taboo. There was always a line. I never put them together. But one time I was in Bozeman at the Native American Heritage Day. I was asked to share the culture and do some fancy dancing. We danced, we talked about the history and then the lady organizing the event came over and said, ‘hey, don’t you rap?’ I was like, ‘yeah,’ and then she’s like ‘hey, why don’t you do it?’ So I went to change but she said she needed us now, so we did it in our outfits. When we got done, I saw one of the elders – my grandpa– and I was afraid he was going to scold me, but as he got closer he took his hat off, shook his hand, told me the performance was powerful and applauded me for speaking the students’ language. He applauded me for sharing a positive message about being drug and alcohol free. He told me to keep doing it.”

That was the moment Christian Parrish Takes the Gun became Supaman. He got the permission he needed to carry on and let his heritage be part of his image as a hip-hop artist.

“Hearing my elders say they approve as long as my intentions are good was the major shift for me,” he said. “This was a big step, a huge step. Not everybody would take this step, but I went for it and I’m glad I did.”

Taking this risk solidified Supaman’s identity as a performer and separated him from others in the industry, which was something he’d wanted to do since the beginning.

“An emcee called Ras Kas says ‘everybody can rap…what makes you special?” he said. “I know what makes me different, and I embrace it.”

But ‘Supaman’ is just one part of Takes the Gun, as he’s a husband with three children who is always striving to be the best family man possible. Having their support is what makes it all worthwhile for him.

Supaman said he’s grateful for the opportunity to perform for the Central Montana community.

“It’s been great to be here in Lewistown,” he said. “I’m encouraged by what I’ve seen here. I think we’re headed in a good direction.”

(as published by the Lewistown News-Argus)

Originally from the suburbs of Indianapolis, Denison is a writer and musician who has picked up culture and influences from eccentrics all over the U.S. and even overseas. He is a University of Kentucky Journalism School grad and an award-winning Montana journalist. Through the years he's had work published in the Montana Quarterly, Rural Montana Magazine, Raised in the West, Last Best News, NUVO and others. He has a solo album, "Whispers of the Lonely," blending country, folk, blues and soul, and plays regularly with his band, Groove Creek.
View all posts by CharliesTinyUniverse →
This entry was posted in Music and tagged kindness, MTV VMAs, Native American, Supaman. Bookmark the permalink.