Reflections on “Joker” and society today

Posted on October 23, 2019 by CharliesTinyUniverse

“Wanting people to pay attention, you can’t just tap them on the shoulder. Sometimes you have to hit them in the head with a sledgehammer…then you get their strict attention.” – John Doe, “Seven.”

Kevin Spacey’s role as a serial killer playing out the seven deadly sins in the iconic David Fincher thriller from 1995 has many similarities to Joaquin Phoenix’s portrayal of mentally disturbed Arthur Fleck in “Joker.”

Doe’s actions were meant to protest society’s tolerance of sin, which he believed had reached an apex far beyond healthy, far beyond excusable. He wanted to do something about it by making a graphic statement. Driven by his narcissism, he believed he was chosen to deliver God’s wrath.

Unlike “Joker,” Doe’s actions were orchestrated. Arthur Fleck did not intend to use violence as a way to express himself. The gun he uses to kill three men on the subway was initially meant for self-defense. But once he’s lauded as a vigilante he trades up a failed stand-up comic career to go full-time villain.

What did you expect? It’s a bad-guy origin film, one with an ending that empowers evil. In the shocking climax, “Joker” is celebrated – even oddly worshipped – for killing fictional TV talk show host Murray Franklin (appropriately played by Robert DeNiro, star of “Taxi Driver” and “King of Comedy”).

In “Taxi Driver,” Travis Bickle (DeNiro) tries to avoid turning into a “Joker.”

“I don’t believe one should devote his life to morbid self-attention,” says the lonely narrator struggling to find friends in late-70s New York, a dark and depraved place like the Gotham Todd Phillips creates in “Joker.”

Bickle turns to violence, as well. In the end, he’s a savior for a 12-year-old prostitute (Jodie Foster). He has good intentions as a vigilante, but let’s not forget he first attempts to assassinate a political candidate. He feels rejected and tries to take it out on the man who represents everything he can’t have, the man the woman he loves admires.

These films all glorify evil in some way, but our society is more frightened and fragile now. Violence, sadly, is an option, an escape route, a way to achieve celebrity status for far too many. Death counts are rising. 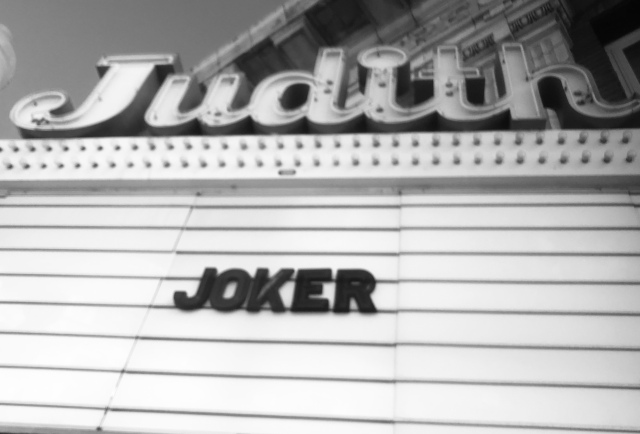 Oliver Stone’s “Natural Born Killers” came out the year before “Seven.” There was controversy and concern, but nothing like we’re seeing today. If these movies were to come out now, the outrage would certainly be there. The protests would impact the viewing of the film, just as it has with “Joker.” We were told it should scare us, we were warned it could potentially the wrong ideas to the wrong kind of people.

What good were these warnings? And were they legitimate? They certainly worked for DC Films and Village Roadshow Pictures, as “Joker” has grossed more than $700 million worldwide.

Are these warnings merited? Are dark films such as “Joker” to blame for what society has become? Who can say? Four years after John Doe’s rant in the backseat of the police car in “Seven,” two bullied outcasts shot up their school in Littleton, Colorado. Would they have done that if they hadn’t seen “Seven” or “Natural Born Killers,” the latter of which was one of their favorite movies?

People try to blame the media, but aren’t these films reflections of our sick society? These movies are works of fiction. They are art. And they are inspired by the society that breeds them. We’re broken, and one large reason we’re broken is captured by Doe’s self-righteous comment. We’re ego-driven and we don’t feel heard. We’re isolated and desperate. We all want to feel important. Instead, we feel like a pawn in the game, a sheeple, insignificant.

This is more the case now than it was in the ‘70s or the ‘90s. With the prominence of the Internet and social media, we’re all drowned out, leading to more megalomaniacal, bombastic cries for help. Our sledgehammers are AR-15s.

How do we prevent this?

We start where we are. We listen. We don’t go online to find our friends. We find them in our community. We talk to our neighbors, or at least make an effort. We don’t try to be right all the time. We try to co-exist with those who have differing opinions.

Will this solve everything? No. But it’s a start. Don’t let contempt fuel you, and don’t let ego drive you. Be kind and considerate to others and be compassionate to those who are in need of compassion. If we try harder, perhaps the John Does, the Travis Bickles and the Arthur Flecks won’t feel so alone.

Originally from the suburbs of Indianapolis, Denison is a writer and musician who has picked up culture and influences from eccentrics all over the U.S. and even overseas. He is a University of Kentucky Journalism School grad and an award-winning Montana journalist. Through the years he's had work published in the Montana Quarterly, Rural Montana Magazine, Raised in the West, Last Best News, NUVO and others. He has a solo album, "Whispers of the Lonely," blending country, folk, blues and soul, and plays regularly with his band, Groove Creek.
View all posts by CharliesTinyUniverse →
This entry was posted in Film, Pop Culture, wisdom and tagged Joaquin Phoenix, Joker, Natural Born Killers, Robert DeNiro, Seven, Taxi Driver. Bookmark the permalink.